As each year passes, we're learning more and more and are developing better and better ideas about how we want the yard to end up and how we intend to manage it and make it thrive. I found doing a yearly review last year really helpful, so I'm going to make a habit of it.
This year I'm feeling as though there's finally something to see for all the work we've been putting in, although it's still quite a modest little something compared to the amazing garden I carry around in my head! Nevertheless, I'm starting to get a sense that each time spring comes along, there's a little more to see and a little more to feel proud of and excited about.
Useful Plants
This year we've got a better selection of useful plants going on out there. We have plenty of foraging plants, most by accident and a few that I've grown myself (sorrel, for example). 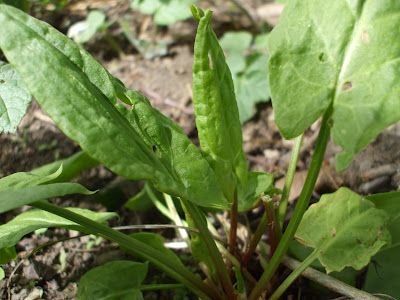 We should also be seeing a great selection of companion plants self seeding themselves around the vegetable patches. These include chamomile, marigolds and nasturtiums. 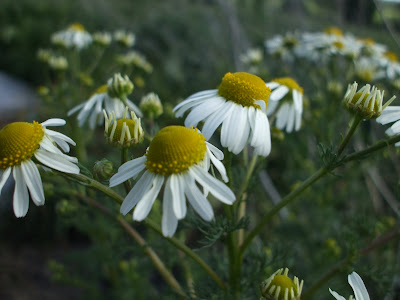 The chamomile I grow with brassicas to deter white fly and marigold I grow with beans to deter blackfly. These two appear to work very well for me. The nasturtiums are supposedly to distract cabbage white butterflies from my brassicas, but they didn't work very well at this. However they did a great job at providing a dense ground cover and keeping the weeds down and they're very tasty, so I'll definitely be transplanting any seedlings that come up to go with my brassicas again.
Vegetable Growing
Last year I continued my no-dig methods in an attempt to build up soil quality. I have been starting from a very low level of soil life. Some of the beds were treated with chemicals by the previous owners and some of the beds are made from imported inert top soil. Not ideal any of it! Last year we had a much better year for the size of our crops. I'm really hoping this has been helped by my not digging the soil around, killing off soil micro-organisms as I go and depleting the soil quality as a result.
One issue I've had with the no-dig method is weeds. I used to just dig them all out in the spring and then re-dig if I needed to later in the year and dig again in the autumn. Now I hand pull them all gently and last year spent a LOT of time on weeding. In an effort to cut this time down, I have used three main tactics:
1. I've installed permanent paths, using heavy duty black sheeting laid over the top with wood chips and/or pavers. 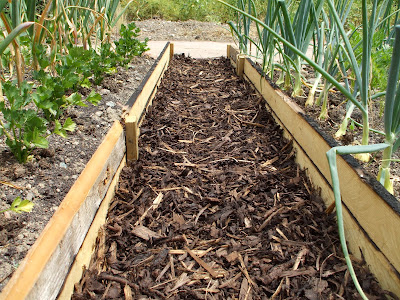 2. I've used companion plants to act as a weed suppressant - nasturtiums around my brassicas. 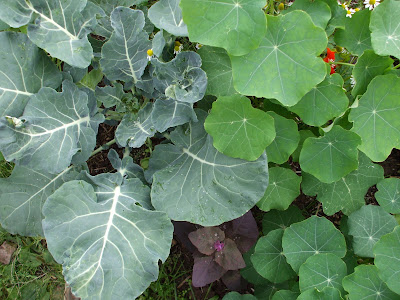 3. I mulched my parsnip and celeriac bed with straw, Emilia Hazelip style. This worked wonders! Only a handful of weeds broke though all year! But the parsnips and celeriac did look a little slug eaten, which I don't mind too much, but it's not ideal. Not sure what to do about that. But I'll definitely be using this technique again this year and on as many beds as it makes sense for. 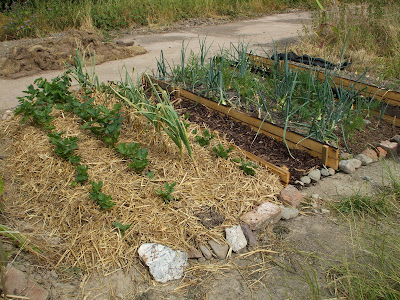 I also experimented with a few new vegetables. I grew a good selection of winter vegetables, including winter radishes, radicchio and mustard greens. Unfortunately, I found all of these a bit disappointing. Last autumn was very busy, so I was late getting the winter radishes and mustard greens into the ground and so had a pretty rubbish crop of both. The radicchio wasn't really to my liking. Bit bitter. Grew really well though under fleece through the winter and added to my winter salads.
Lastly, I've planted out my fertility patch and it is now thriving and is giving its first harvests this year. Comfrey has worked wonders for my tomatoes in the past but now I've got so much of it, I'm hoping to use it in lots of different ways. I'd like to experiment more with using it as a mulch around my plants. I'd like to make some comfrey tea, which is said to be very good for fruiting plants and I'll be adding it to my compost bins as it is meant to be very good as a compost activator.
Land Reclamation
We had a lot of success last year in reclaiming areas of the yard that are thick with nasty weeds like nettles and brambles. We used two techniques back last spring - laying down black sheeting and laying down cardboard, covered with soil, covered with straw. The black sheet patch worked fantastically at clearing weeds and is now a medicinal herb garden/soft fruit garden. The cardboard patch is now our fertility patch and has lots of comfrey plants on it. Some nettles have survived, but at a very manageable level. We are doing a lot more land reclamation this year on the vast nettle patches around the edges of the yard.
I'm keeping my fingers crossed that the barn conversion will happen as planned over this summer and autumn, meaning that we no longer need any hard-standing and so can get the concrete up over this winter. Frustration levels are rising at still having most of our site buried under concrete. 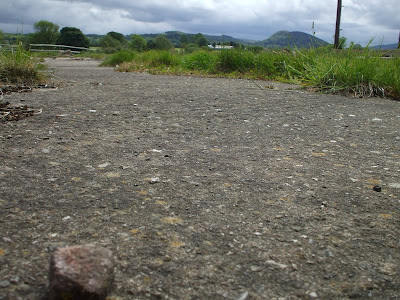 Forest Garden
At last, I feel as though I can say I've started planting out our forest garden. I should emphasize that I've only started doing this in very small areas compared to the size it will eventually be (hence the frustration at all that concrete). But we have our first fruit trees, fruit bushes and herbs planted out on the yard. 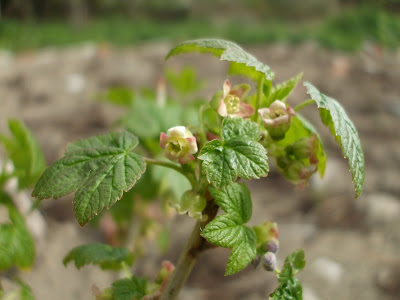 I'm also growing some perennial vegetables from seed, which will join them later in the year. I hope to write up a number of posts about how this is going over the next year.
Barn Conversion
The plans are being finalised and we've tweaked our original ideas somewhat into an even better plan.
Just to recap - we have two semi derelict brick barns, standing back to back, so forming a roughly square shaped floor plan with the south face (to left of photo below) looking out over our lovely view. 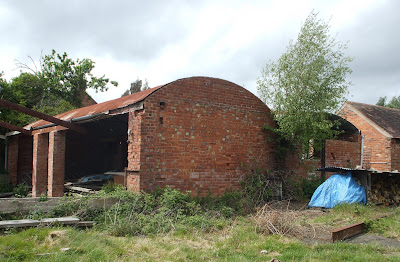 We're definitely going ahead with a grass roof, but the floor plan is now to be L shaped instead of roughly square. This is to be achieved by knocking out one corner of the barn block (to the right in the photo) and then extending out from one of the resulting legs if you see what I mean. The new open space on the inside of the L will be walled off on the two open sides to form a walled courtyard in which we can grow meditarranean herbs - it'll be the most sheltered spot on our site and should really benefit from having a south facing wall and lots of brickwork all around. The south facing wall is actually the wall to our bedroom (pitched roof wall in right of photo), so the ultimate plan is to put patio doors into our bedroom and to make this a private, outdoor bedroom extension. Just imagine the lovely smell drifting through from all those herbs.. Bliss!
The barns themselves are still to be turned into workshop space, bike shed space, office space and a lovely big greenhouse. Because we're using a grass roof, we'll have a really low pitch roof, which means we can raise the wall height without raising the roof height and so will have higher walls without upsetting the neighbours. This means the greenhouse can be really high. This is very good news! I'm thinking pigmy bananas (do they exist?), avocado trees.. what else? Lots of exciting potential.. must get down to some research on that..
But [sigh] progress is being really slow. I'm not holding my breath on this one happening on schedule (i.e. this autumn for barn, greenhouse the following year or so). Keep your fingers crossed for me! 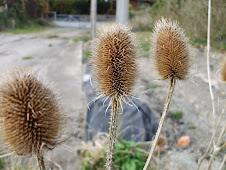